Bineroo was initially released in August 2020. Back then, it was a side project I developed during the pandemic to learn Flutter. A bit more than two years later, It reached a important milestone and I would like to share some insights.

For those who already know what Bineroo is, you can skip the introduction and directly dive into the exciting part.

I won’t lie: Bineroo is an adaptation of an existing game known as Binero, Takuzu, or Binairo depending on the country. I never claimed the paternity of the game concept. I tried to revisit it and give it a new perspective by adding nice new features.


Basically, it is a binary puzzle where you need to fill grids with black and white circles by respecting 3 rules:


Here is the trailer for the v1.7 release. This gives a pretty good overview of the gameplay.

It is available on both Google Playstore and Apple Appstore

NB: I am working on web and desktop versions. That’s the cool part with Flutter. So stay tuned.

I have been collecting data about game usage nearly since the beginning. It allows me to monitor the habits of the players and the adoption of newly released features.


In addition to all the basic metrics provided by the analytic platform (DAU, MAU …), there are a few other ones that I watch closely:

I am proud to announce today that the game hit a major milestone with 100k grids successfully completed by players.

This is a pretty big achievement that gives me the motivation to keep going in this direction. Thanks a lot to all players ❤️

🚀 Next: the 1M milestone


Now the big question is when will the game hit the million grids completed milestone? I hope not in ten years 😆


Let’s start by looking at the evolution over time. 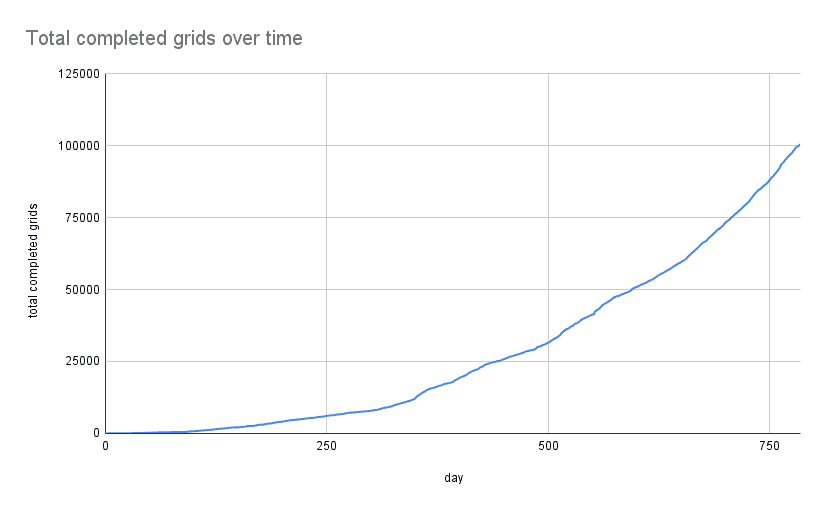 The graph shows a real acceleration over time which is very good news as it means more and more engagement (more players and/or more grids completed per player).


It also means that it will take less time to complete the next 100k grids. But how much time exactly?


This is where it really gets funny and geeky.


Google spreadsheet provides the possibility to show trendlines for a data series plotted on a graph. The default configuration is a linear trendline but there is a bunch of other possibilities (exponential, polynomial, logarithmic …). In our case, the best type is polynomial. You can even choose the polynomial degree (up to 10) to stick as close as possible to the raw data. 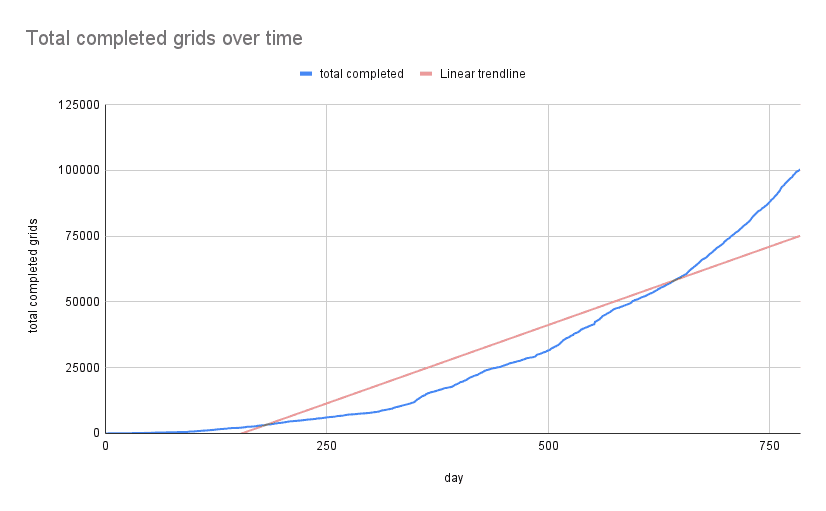 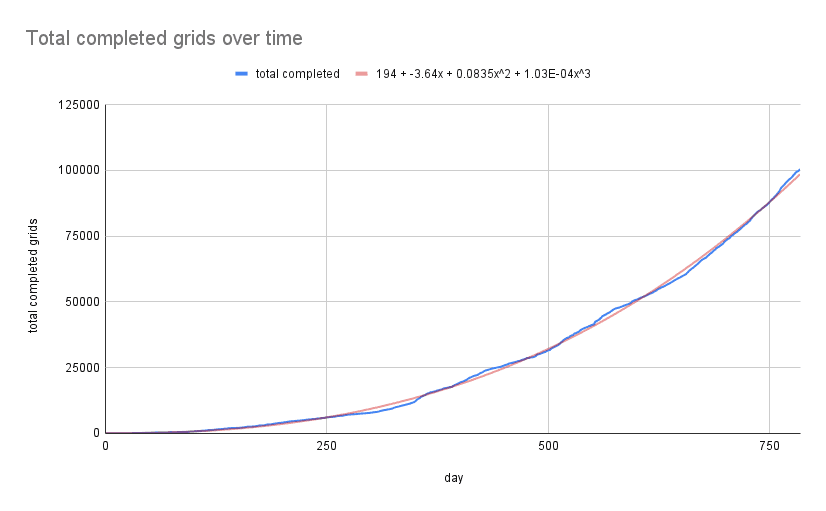 The equation can be displayed as the trendline label on the graph. So in our case, if we use a 3-degree polynomial type (which is good enough), here is the equation:

Once we have the equation, we can use it to calculate future milestones. You can do it by hand if you have the time and energy to do so but I am a bit lazy so I delegated this tedious task to an online calculator 😎


Now we can have the answers to our questions.


So let’s set a reminder for Sunday, August 6th, 2023 to see where we will be with this milestone 📆


And now the answer to the big question “when will the game hit the million completed grids milestone?”

It will take 3 more years 🎉


What about a community challenge?


And you, can you help me? do you have any ideas to propose? I am all ears.

Binary puzzle with 1600 grids free to play and daily challenges